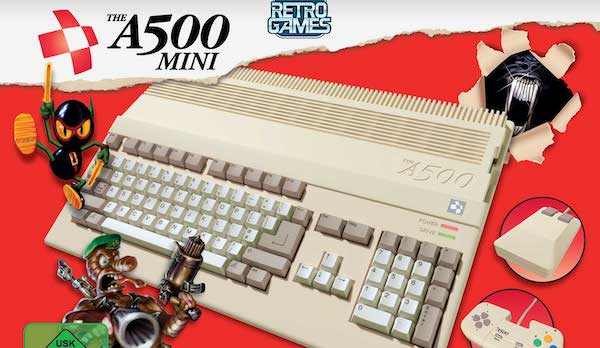 If the Commodore64 signified my formative years in gaming, then the Amiga 500 dragged me through my angsty teens. The leap from 8-bit to 16-bit was enormous, the leap in quality and engagement groundbreaking. Not forgetting the transition from twiddling Azimuth Heads on a tape drive to the joy of slotting in a floppy disc or six. Now decades later the A500 Mini is here to save retro fans.

Retro is a funny old game on the A500 Mini

Like a lot of enthusiasts I’m always keen to revisit these happily garish memories. Like some enthusiasts I’m often disappointed. This was more prevalent to the C64, memories from the dawn of gaming where an ambitious imagination filled in the blanks between pixels.

At school the bedroom developers were my rockstars. Running home from school to play the latest from Tony Crowther, Jeff Minter or Andrew Braybrook. While looking forward to the schoolground chats tomorrow, and the swapping of ‘ahem’ backup tapes.

The C64 got me a long way through school and even early college, then it changed. The Amiga hove into view, the world was changing and was filled with more colours. I got on the Amiga bus at the expense of my C64, selling it and a huge collection of ‘mostly’ genuine tapes to fund my A500. It’s a move I’ve long since regretted, if only I had held onto everything.

Back in the day the Amiga was a playground, having a desktop it felt grown up’ like a real computer. Peripherals were getting better and every week there was a new classic game landing. So why wouldn’t we want to go back?

RetroGamesbiz have now turned their attention to the Amiga, creating an “Oh so cute” version of the caramel coloured hunk that used to take up most of my desk. Physically they’ve done a good job, it looks the part, a scaled down model albeit without a working keyboard as usual.

The unit comes with a classic “Tank Mouse”, although it doesn’t run on a fluff gathering ball anymore. Along with a control pad, which is okay to say it generously. Like the C64 it’s USB powered, although you’ll need your own adapter and has a HDMI cable in the box.

No. No Workbench screen, just a few system settings to tweak with the control pad and that puts you straight into the pre-loaded games. While the selection is considered classic, it has to be said there are some glaring exclusions. There are obvious omissions, Sensible Soccer, Cannon Fodder, Syndicate, Captive, Virus, Populous, Utopia, Batle Isles, etc, etc, etc. The internet can of course nefariously fix you up, but looking at the menu, there’s definitely a few misfires onboard.

That’s the thing with Retro memories though, one person’s Sensible is another’s Kick Off.

Spinning through the carousel there are a couple of standouts, The Chaos Engine, Speedball 2, Stunt Car Racer and The Sentinel. Some of the others, while having fond memories, don’t stand up to the controller in hand or the lack of time we have now.

On the plus side, I enjoyed Cadaver a lot more now than I did nearly 30 years ago. It was always a game I appreciated for its style, but never really got very far. My older brain clicked on a few more puzzles and even wrestling with the controller I managed to progress quite happily.

Speedball 2 should need no introduction, but it’s been re-done to death and I’ve re-done it to death. Which leaves me a bit distant. Whereas The Chaos Engine is a firm favourite I’ve often recalled. The Amiga version was the purest for me, and one of the first times you could co-op with an AI in your own home. Not forgetting the Steampunk vibe never gets old.

Look, the A500 Mini does what it says on the tin. It’s a tidy desktop slice of retro memories. The games on offer might not be the best, but you have the option to bolster the collection as you see fit. Schoolyard rules apply, floppies with names written in pencil etc. Besides, I already have my personal favourites on other devices such as the Evercade.

Of the peripherals, the mouse is a lovely solid throwback and feels good in the hand, the controller could do with a tweak.

It’s by no means essential, but like the C64 will fill a gap for a retro enthusiast that hasn’t found an original machine at a boot sale.