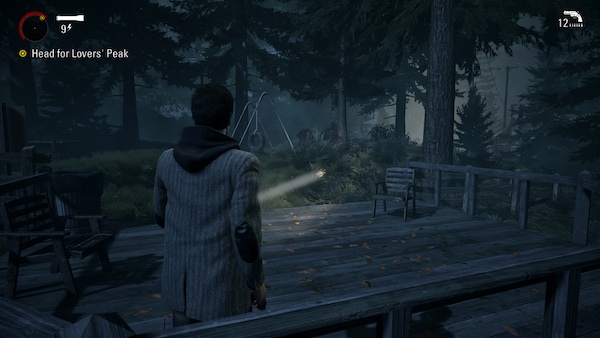 Alan Wake is not your typical video game hero.

He’s not a former soldier skilled in the art of warfare or a wronged man out for revenge: He’s a writer in a tweed sports jacket with leather elbow pads (over the top of a hoodie) who runs out of puff after he’s sprinted for a few seconds. He’s an every day man.

Alan Wake tells the tale of … Alan Wake. A struggling writer and the game opens with arriving in Bright Falls, in America’s north west, for a vacation with his wife, Alice. He’s hoping to cure the writer’s block that has stifled his creative flow for two years but he quickly finds out that all is not what it seems in this seemingly sleepy town.

After meeting a strange woman at the local diner then driving to their assumed accommodation. A cabin on the idyllic by day, but creepy by night Caldron Island. Things take a sinister turn when Alice goes missing and the manifestations and nightmare’s in Alan’s head seemingly come to life – and they’re hunting him down.

Coming from Max Payne, Control & Quantum Break developer Remedy. Alan Wake is part Twin Peaks, part Stephen King novel, and in fact, King is referenced in the opening monologue from Wake himself. Remedy has also made no that David Lynch’s Twin Peaks was an inspiration.

What follows is an ordeal that takes place, mostly at night, in gloomy, fog-laden forests and shadowy locations. As Alan works to find out what happened to Alice, and why his nightmares are tormenting him.

Combat isn’t the core mechanic here but it has an interesting twist to it. Enemies in the game are protected by a barrier, of sorts, that Wake can burn away with a flashlight/torch. Once the barrier is broken, they’re vulnerable to conventional weapons like a shotgun or a revolver. Or a flare gun, which is perhaps the single most satisfying weapon in the game.

Imagine, if you will, firing a flare at a group of advancing enemies. Time slows down as it explodes in a brilliant flash of crimson light, disintegrating the foes in its influence. It’s magical. Of course,  Wake’s torch isn’t infinite: It’s runs out of batteries, forcing Wake to forage for ammo and batteries as he progress. The combat highlights the everyman nature of Wake, too. He’s an ill-equipped writer trying to wield a shotgun while holding a torch when he’s more at home punching the metallic keys on his typewriter.

First released as an Xbox 360-exclusive in 2010, Alan Wake Remastered is just that: A tweaking of the original game, which means that while looking sharper and better than its predecessor, it still retains some of the janky mechanics and foibles of the original code. The remaster is also available on the PlayStation for the first time, too, and the package also brings the The Signal & The Writer DLC.

Visually, the remaster brings sharper textures and better looking environments, as well as a different Alan: A new actor was cast to bring him to life this time around (apparently it’s more inline with the original mocap actor). The game runs at higher resolutions & frame rates than the original, and the environments just seem more dense and detailed than the original. The core gameplay is the same, though.

Despite the intervening years, I still found Alan Wake a heart-pounding psychological horror game at times. A testimony to Remedy’s skill at building narrative but 11years on – now that I know what happens – the game didn’t unnerve me like it did when I first played it.

I played on PC (via the Epic Store) and experienced a few technical hiccups: Every now and then pixelated screen artefacts appeared across the screen, especially when transitioning from gameplay after a cut scene, & sometimes audio just cut off mid monologue.

For those looking for a massive overhaul in Alan Wake’s core gameplay mechanics will be disappointed with this remaster. It’s the same game from 2010 with a fresh lick of paint. If you want modern mechanics and current generation graphics, you’ll have to wait for the hopefully coming soon Alan Wake 2.

For gamers who haven’t played the original, though, and want to experience one of Remedy’s best but underselling games on a modern console or PC (sadly, it was released around the same time as a little game called Red Dead Redemption), then this remastered version is an excellent starting point. 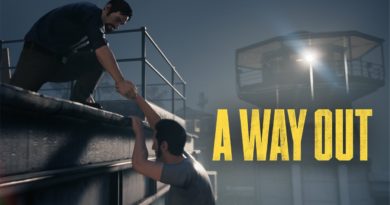