I’ve had one beady eye on this since it was revealed, amongst all the touted VR titles Eagleflight stuck out as trying to be really different, offering a new experience wrapped up in the excitement and hype of VR.

Upon launching the title the game makes you feel part of National Geographic presentation, or at least like a willing participant in an Epcot presentation about the life of the Eagle. The echoing narrator and the sweeping vistas of Paris carrying you along, its an absolute pleasure.

The game is set in the destroyed beauty of Paris about thirty odd years after people, fair enough and a clever trick as it means the streets can be overgrown with vegetation, animals can run wild and the programmers don’t have to worry about processing thousands of pedestrians and vehicles. The menu sits you atop the wreckage of Notre Dame and the view is spectacular at first sight, from there we launch into everything that Eagleflight offers. Interestingly the Paris of the future has been overrun by a cornucopia of wild animals, Elephants, Deer, Crows, and Giant Salmon to name a few. I’m sure there is some ecosystem at work and these are the sole survivors after the zoo collapsed, populating areas of the city with their own kind and keeping the food chain in this shape. It keeps the environment interesting and on more than one occasion I have glided round a blind corner straight into an elephant’s rear. Signalling the crump and black screen of death. The game itself starts slowly, with layered intro levels opening up different challenges. There are point to point races through rings, feather collecting challenges, combat challenges and subterranean speed runs through catacombs and you know what? They’re all fun in their own way, some of these modes would put me off in a racing game, but I think the sublime controls of Eagleflight make them accessible and easy to try over should that third elusive gold star still be out of your grasp. Mentioning the controls is worthwhile, all flight directions are handled via head movements. I’m sure that there must have been a Ubisoft presentation likening this to actual Eagle flying methods, well whatever – it works. Flight speed is handled with left and right triggers either slowing or speeding you and there are buttons more for fanciful combat shooting your ‘Eagle Screech’ and raising a shield, which is where we slip away from Nat Geo somewhat.

Turning is the hair splitter, the game is designed and happily reminds you that turning is achieved by ’tilting’ your head, imagine listening to distant rainfall, not ‘turning’ your head this will start to hurt. At first its easy to forget and mix it up, then you find your self looking away at an obtuse angle wondering why your neck aches and the forward view is off to the left. Also notable is the fact that you can’t look away from your flight direction, but its quite likely that is saving you from motion sickness, so I’m okay with that.

Once the levels open up your horizon suddenly becomes quite full of challenges to work through and chapters to complete, each chapter having a number of collectibles across the map to seek out – its all from pure Ubisoft blueprints. Where it can be a distraction in some games, it pretty much is the game in Eagleflight. Flying through challenges will earn starts and stars open up later levels, its busy work, but approachable and not overly taxing. Multiplayer adds a nice take on Capture the Flag, a three vs three mode where eagles race to collect a dead rabbit and carry it back to their nest. This is where the weaponised eagles come into play, its a lot of fun if you can find more than one other eagle to play against – mind you the cat and mouse shenanigans of that can be a laugh. Dipping down to street level and breaking line of sight, twisting through streets, popping up shooting an enemy out of the sky, grabbing the prey and racing for your nest. Talk about suspended disbelief.

Overall its a nice little game, it might not have a long shelf life, but its great to see something more innovative to explore the capability of VR. It also gives me great hope for a decent flight sim or maybe even that elusive update for No Man’s Sky. 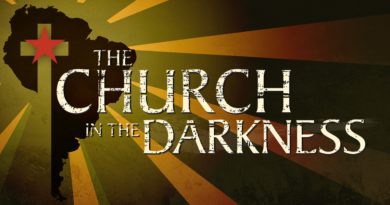 The Church in the Darkness, PS4 Review