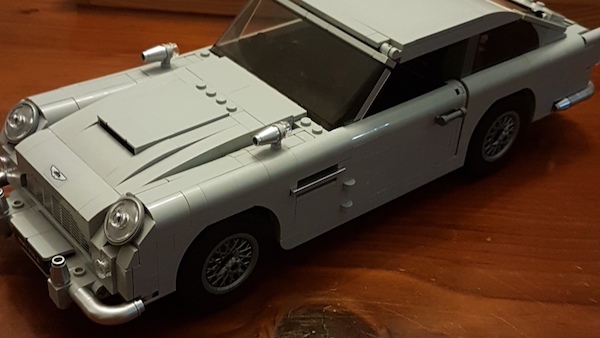 It’s a little talked of fact, but LEGO gets more sexy the older you get. As a small boy I enjoyed my LEGO spaceship (which seemed to be enormous), as an adult I can appreciate the set’s wonderful design, joy to build and marvel at how compact and bijou it actually was… That was me a long time ago, in a galaxy far away, here I am in my late, very late forties loving LEGO and getting all excited about wonderfully crafted city blocks, Ghostbusters Headquarters and Millennium Falcons.

Then before I could take the plunge and convince the grown up I live with that it was ‘all for the kids’ LEGO undid me, they went and released the Aston Martin DB5, the only car I ever cared about and I had to have it. 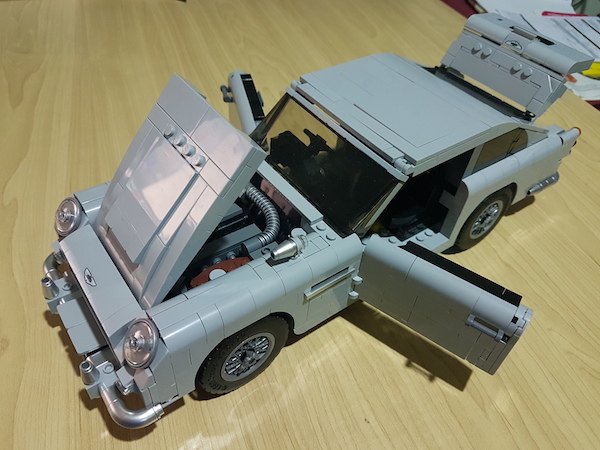 1964 was the absolute pinnacle of British Automotive Engineering, as far as I am concerned. Aston Martin gave birth to the sleek and sexy DB5 and to cement its place in the annals of history Aston Martin gave a prototype to the James Bond crew, who it turn gave it machine guns, retractable tyre spikes, a bullet shield, car phone, radar, oil slicks and the ultimate, the passenger ejector seat. Phew. That was a turning point in history, well I think so.

The DB5 has made a few appearances over the Bond years, the Daniel Craig movies have made respectful homage to the beast apart fro its total destruction in the closing scenes of Skyfall. The marriage however was made with Connery and when the pair took to the screen, they became a double act. The debonair charm of young Connery and the curves of the DB5, it was as English as Fish and Chips, the ultimate poster pairing and they both looked stunning in colour or black and white. 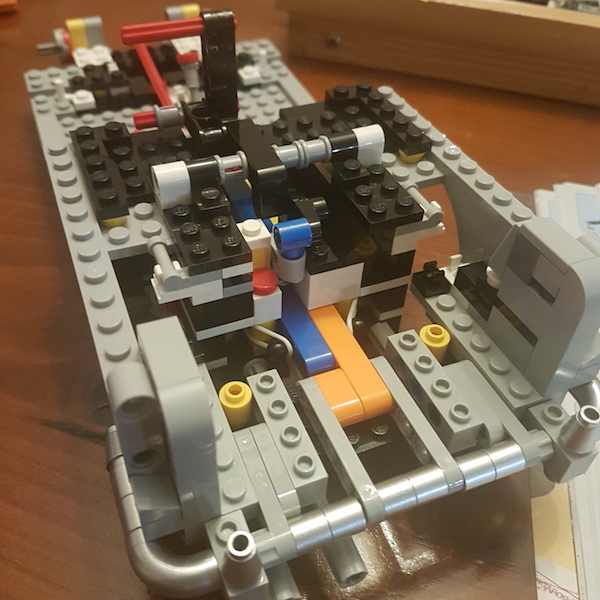 I’m not a car person, spending cold Sundays handing my Father spanners staring at greasy engine blocks was not my favourite experience. I dislike buying cars, I dislike the hassle of owning cars and disposing of them is generally a royal pain in the arse. However, if money was no object there is one single car that I would want in my drive, it would get polished every Sunday and taken for roaring trips into the countryside with a chilled bottle of champagne between the seats. That car is my Unicorn, that car is the classic DB5.

Fast forward to 2018, I knew the LEGO set had been around for a few months, but I had not seen one in the wild. I knew I could get it online in Australia for somewhere around $200 which wasn’t too offensive. I was not however prepared for wandering into a LEGO store in Dubai, which incidentally is exorbitantly overpriced and walking out with the beautiful kit firmly squared away in my hands, after spending an exorbitantly overpriced amount for it and the yellow LEGO bag it came in. 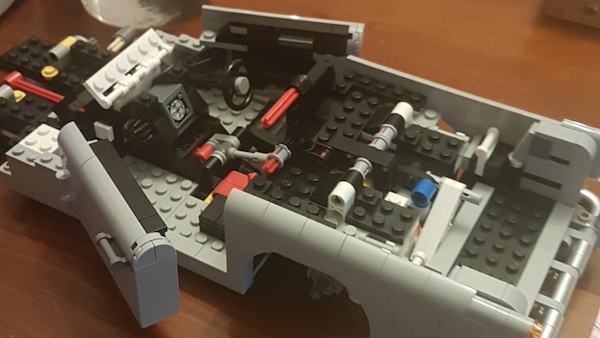 After the rush of adrenaline while I stood in the shop holding my purchase I went through a number of emotions. Guilt, embarrassment, stubbornness and a modest amount of joy. When I got back to Australia I reverently placed it on a shelf to look at, part of me saving the build for an occasion like Christmas and pat of me wanting to put this ridiculous thing behind me and sell it to at least recoup some of my money. The latter did not happen, the former did, which ended up with myself and my Dad spending a couple of Christmas evening drinking whiskey over ice and building the DB5, and it was awesome.

We both have to admit, it sparked a keen curiosity in both of us to explore LEGO more now, I am a fan of the Expert City Blocks, he has already completed his Technics Mack Truck… 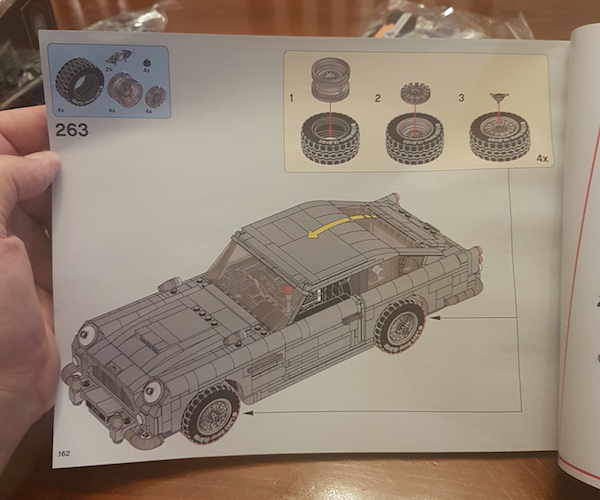 Anyway, what about the kit? Well for a fan of the car who still has his die-cast DB5, complete with a twelve year old’s idea of a cool paint job. It’s fantastic, the layering that goes on behind the scenes to design and structure a model like this fascinates me, as you build it up action by section you can appreciate the work that has gone into it. That appreciation would be big enough for just a shell of the car, but to see the inner workings and the mechanical aspects of making LEGO bricks mimic the secret functions of such a famous vehicle is mind blowing. Not to mention the size and scale of the model, the weight of it and the oh so smooth running wheels, although some steering would have been nice. 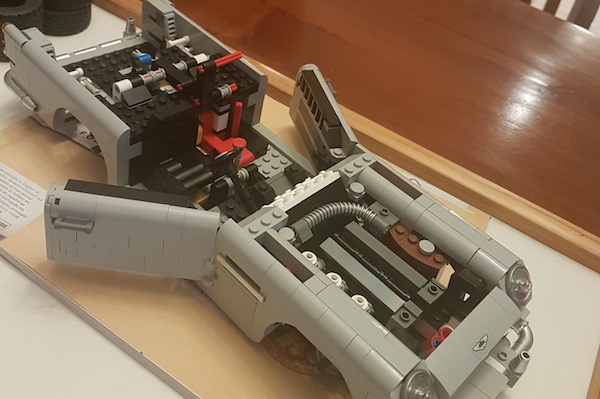 Those features are, in no particular order. Revolving number plates front and back, these are manual and just require a quick spin of the finger. The bonnet and boot open, so do the doors and they give access to the in-door car-phone (from a time before car-phones). Inside the car the secret radar can be display by rotating the dashboard fans and a pull of a lever where the handbrake should be will rotate the front lights into machine guns. At the rear is the juicy stuff, a twist of one of the exhaust pipes will raise and lower the rear bulletproof shield. Then comes the money shot, a quick tug on the centre of the rear bumper will pull back some switches and against the force of an elastic band, the roof will slide back out of place and the passenger seat will eject smoothly into the air. Well spin up a couple of inches at least. Again its really clever piece of Technic engineering, hidden away inside the body of the car and I know full well there is no way I could replicate it without eat pieces and instructions. 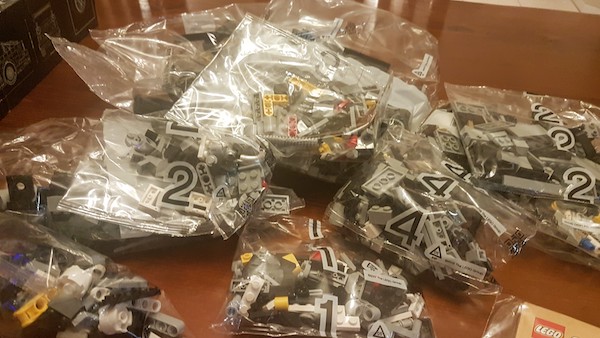 Externally the car looks the part to me, LEGO should express the original and this kit certainly does, I have since seen LEGO review experts poo poo the presentation of the kit. Let’s get real people, it is LEGO after all, it’s a fun thing to do and recreates for me an icon of my lifetime, so I’m happy with the design and level if smarts that has gone into it. The external grey colour has been bemoaned too, I like it and to be honest if not having silver kept the cost down I don’t care because it works.

There was only one gripe and it did relate to the exterior, but also showed me the level of quality in LEGO Customer Service and the lengths they will go to. As we completed the kit one piece of the roof stood out, it was matte when the rest was gloss, it just didn’t seem appropriate. I sat with it for a few days, then contacted LEGO to ask if it was correct. They admitted that it was there by design, but they also admitted that they totally understood that it wasn’t in keeping with the aesthetic of the full car and immediately posted me some tiles to replace it for looking better, although the original piece would be best for heavy use of the ejector seat. That was impressive Customer Service and that is something that reminds me the older I get, the more sexy LEGO becomes. 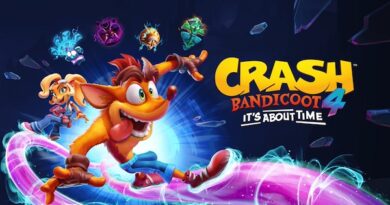