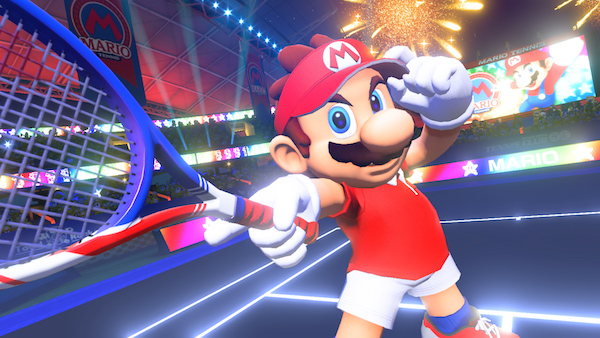 The Mario-fication of sports games are something I have enjoyed across generations, Mario Golf in particular on a black and white Gameboy Pocket through to the colourful N64 version. Seeing first shots of Mario Tennis grabbed my attention, the sharp visuals and the potential for a tennis game coupled with the Switch in its riding high position of recent months.

Sometimes you need to be careful what you wish for. With the benefit of hindsight I would be wishing for a more conventional tennis game.

The game offers up a few play modes at the outset, a story mode to experience the roster of characters and learn some skills whether they are useful or not. Along with the choice of online play, and an offline tournament or exhibition match on the court of your (unlocked) choosing. The Switch Joycons of course add another dimension so there is a Swing option for local play, bringing home something reminiscent of the wiiU Tennis using a Joycon in the manner of a racket to take shots. 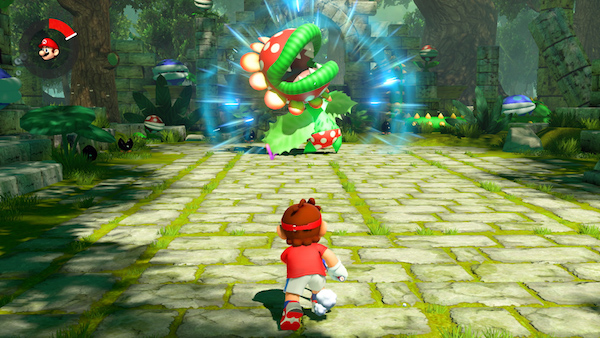 From the top, the narrative mode sees Mario working his way around the map through a number of ‘Tennis-esque’ encounters to rescue Luigi, all well and good. Well they are until you realise its a simple diversion, part training and part frustration to feed you with fail states and restarts. These mini-games consist of meeting lower level characters in an area and hitting targets or returning shots usually to a time limit, make the grade and you can continue. At the end of each section is a Boss fight, each with their own style of play, attacks and weaknesses. Not to mention typically Mario I hear you cry. Well it is in theory, but in practice its limited, dull and never feels like a valuable use of time. A full blown career mode would have been a lot more fun and satisfying, looking at you Gameboy Mario Golf.

The actual tennis plays nicely up to a point and that point is where it starts throwing the special moves and powers at you with abandon. Mario skips around the court at a crisp pace and everything seems in place, but once you learn about Power Meters, Zone Shots, Backflips and Specials it all starts getting lost in itself. The conventional tennis feels good, running around for position and knocking back the normal selection of shots, lobs, topspin, backspin and drives. However having built up a meter with  a decent rally you can unleash a Zone Shot, effectively a smart bomb for tennis. Mario leaps into the air and hits a shot like a rocket at whichever opponent or area of the court you can zone in on, during a first person few seconds. This is essential to beating some of the single player challenges and absolutely essential to winning online games, that said its also easy to let the gyro control drift you off target before you get your shot off. These shots are not unstoppable either, they can be returned as you find with the AI and anybody you meet online, its a simple matter of timing – get that timing wrong (three times) and you racket will break, effectively forfeiting the game. Of course returning the shot also requires reacting swiftly enough to get in to the right area of the court. Yeah, good luck with that.

Playing the roster of characters in friendly modes is fun for a while and once you settle on a style or special move that you prefer then honing that character for online play is probably the way to go. Given the nature of AI and the forced feeling of the story mode there’s not much left and taking the game online to play the world is the only real option.

I played a few matches and relatively early on in the game’s lifecycle, and I got my ass handed to to me every time. The first match went well and I felt like I was winning, then it all fell apart after that every opponent felt untouchable. It really is edifying to know I’ve been making somebody’s day as they trounced the unknown amateur, but there’s not a lot of temptation to bring me back. 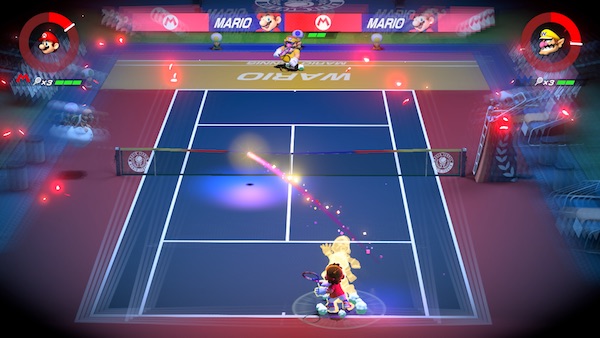 Again, this is where the unconventional moves and specials tend to cloud the gameplay. In normal circumstances you would trade rally after rally until the other player makes an error, mixing long shots and net shots, voles and cross court smashes. However, seeing your opponent backflip across the court to catch a ball and send it back with vengeance takes the shine off, not to mention being on the receiving end of the successful Zone shots. Even if you do have the chance to use combo energy and slow down time to get into position, even if you do take a swing at the incoming super shot in the hope of timing the hit right and countering it. The reality will be more often than not the shot is gone and points scored before you see it coming and any attempted return adds up to the three misses and its Game Over fail state.

Humans are different to AI and there will be humans that ‘get’ the intricacies of the game much more than you. Leave them to it. 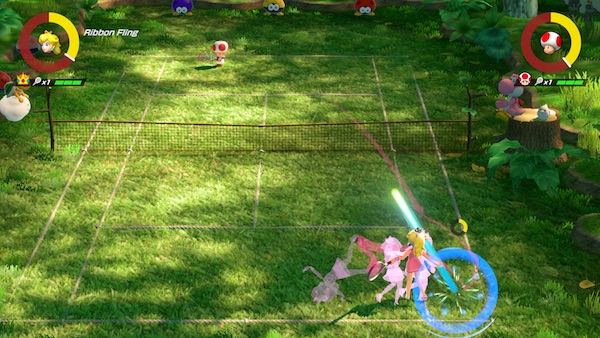 Mario Tennis is a fun diversion and a good looking Mario game for the Switch, it just doesn’t have much long lasting appeal or significant content. Its obvious these character models will be in use for many upcoming extensions to the brand, I can only hope that there is a Mario Golf in the wings with a proper full-on career mode and not a shoehorned-in sequence of shooting galleries.

There was no chalk dust, I’m calling it out, sorry.