Matterfall is undeniably a Housemarque game.

Encapsulating a number of classic genres and wrapping them up in a slick and glossy visual package is the order of the day, the narrative is forgetful sci-fi, but it does give the mechanics of the game some reason to exist.

It’s a 2d Metroid-esque platformer, with nods to classic games like Turrican and bonus driven point scoring that would be right at home with a Jeff Minter title, but it is also dumped squarely in the Bullet Hell bracket. 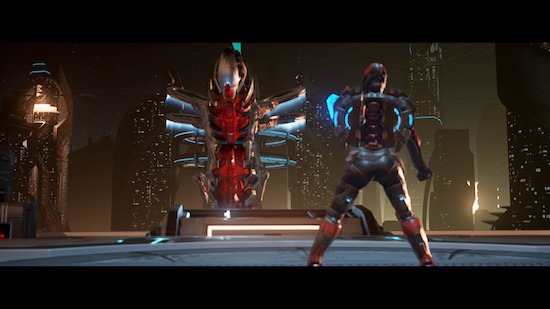 As always, its time to save a planet. There has been an abuse of alien ‘Matter’ and the Red Matter has gotten out of hand, making machines into angry killers and causing mass evacuation to destinations unknown.

Fortunately you are on hand in your nifty flight suit to bring back some order and even more fortunately you can manipulate Blue Matter, which is just the tonic to clean up the Red Matter problem. 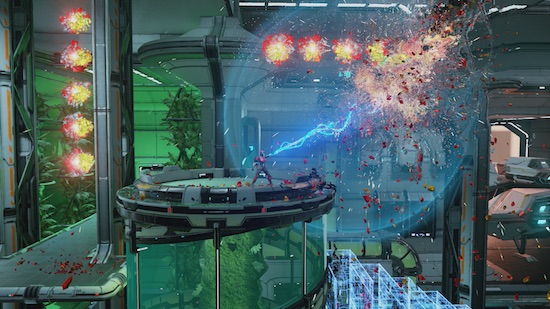 Blue Matter drives your suit and weapons, you can also use it to create handy platforms or barriers where needed. This could be a puzzle, but the empty ‘Volumes’ are sat there in front of you waiting to be filled, somewhat redundantly obvious. It is also worth remembering that the blue platforms created by your Matter will degrade and vanish after a while. Not clever if you mis-time a crucial jump.

Red Matter is bad and it hurts when you come near it. While most of the enemies are vulnerable to your weapons and moves it is worth bearing in mind that a Blue Matter strike will freeze them in place for a few second – long enough to blast them away and gain some critical score bonus. This tactic is essential to move on and increase your score bonus, sliding across the floor or pumping out a well timed strike will clear bullets away and freeze enemies. This soon becomes second nature and not only for the score hungry either. 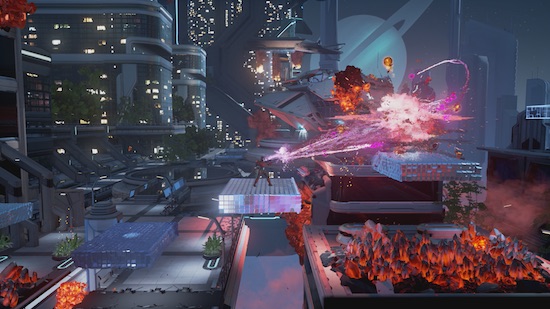 Matterfall is a game that swings between moments of joyful destruction, the screen filling with debris as a chain reaction swamps every enemy and your score starts to rocket. To the other end of the spectrum, the Boss fights. Having been around the block a few times I can safely say I’ve never fought a Boss that made sense, had a point or gave me any satisfaction. The Matterfall bosses are hard, hard to the point of throwing something.

Things were going well as I battled my way through the levels, which incidentally are quite stunningly put together until I came upon the first Boss and ground to a halt. Matterfall is a short game, the sections broken up into 4 seperate levels and topped off with  a Boss of some sort this leads to good replayability, popping back in to sweep a level for collectible upgrades is a must if you have a a spare ten minutes. Also essential if you are stuck and by rescuing a few more civilians you’ll be able to equip a new secondary weapon or buff that might just give you an edge. 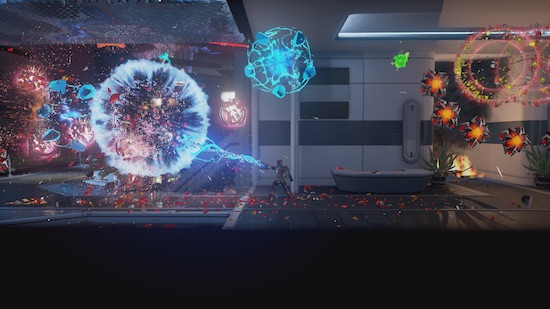 Matterfall is a fun diversion, but at budget pricing and lacking in content it may be seen as an ‘also ran’. The pyrotechnics are spectacular and there is healthy competition on the leaderboards, that said the controller map will be getting a few cries for change, but with some perseverance you can blast your way through like a demon.

I have enjoyed a lot of Housemarque’s titles this generation, but when you have a pinnacle like Aliennation it will take more than Matterfall to take that crown.