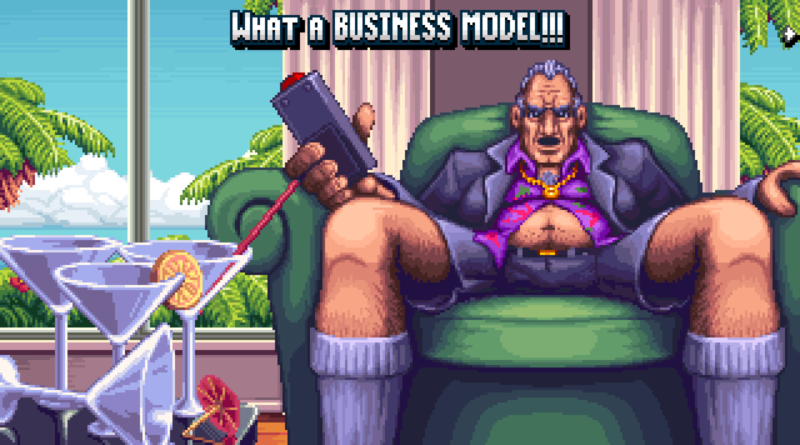 Shakedown Hawaii is a cynical statement about today’s modern age told through the eyes of a dinosaur who is stuck in his ways & is unprepared to change.

In fact, this is how I described Shakedown Hawaii in a recent tweet:

You play (mainly) as a failed businessman – the CEO – who made his fortune in the 1980s from his self-help book but decades on, he’s now running out of money and a relic in an age of streaming entertainment, video games and online shopping – and his business empire is crumbling.

You must do what you can to rise to the top, becoming kingpin again.

Played from a top-down perspective, Shakedown Hawaii pokes fun at a variety of games but it’s most reminiscent of games like Grand Theft Auto. As it says in the title, The CEO decides the way to remake his fortune is to do what he does best: Shakedown the local economy by buying businesses, harrassing shop keepers and taking the town over, business by business, building by building, suburb by suburb.

Shakedown Hawaii is an open-world game with a mix of driving, shooting and wandering around where missions can be as simple as stealing a speed boat for some misadventure to renaming an unpopular energy drink so it appeals to gamer culture. You can also literally buy every single building in the game. From shoe shops to clothing outlets to automative dealers that repossess cars, the world is literally yours for the taking. Shakedown Hawaii doesn’t take itself too seriously, either. 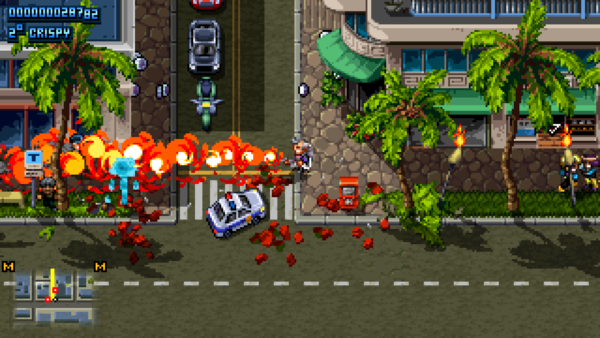 The game’s visual style is reminiscent of some of the games I grew up with as a teenager. I was a child of the ZX Spectrum, the Atari and the 486 PC, and Shakedown Hawaii’s visuals hark back to a bygone age where games like those LucasArts classics relied on game play and not photo-realistic graphics to carry them. Shakedown Hawaii’s visuals made me feels nostalgic for the games of old.

I started playing  the game on my PS4 which is connected to 55-inch TV and it really seems a game more suited to the smaller form factor like the PS Vita (yes, it’s on the handheld that Sony has pretty much forgotten), which is what I did using the PlayStation’s remote play functionality. Things are just waaaaay too pixelated on the large screen. Everything looks just 16-bit right on a small screen like the Vita. 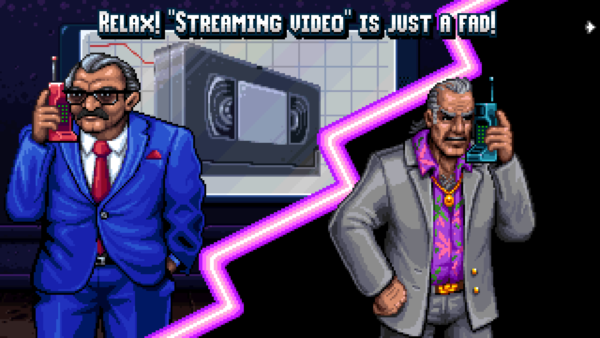 If there’s one thing that I didn’t like about Shakedown Hawaii it was the driving. Driving vehicle’s just wasn’t fun for me. Cars were difficult to control and just felt skittish, making traversing by vehicle a real chore. I spent most of my time, when I didn’t have to drive, getting places by foot or using the game’s subway system.

Shakedown Hawaii isn’t going to suit gamers who love photorealism and don’t get ’80 pop culture references but for gamers who were bought up on old school classics, where gameplay was king and humour was to the forefront, Shakedown Hawaii is just the ticket to scratch that 16-bit itch.