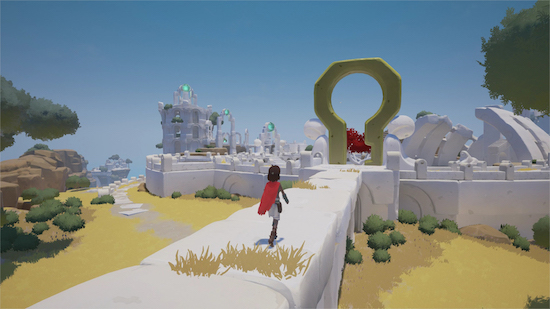 It was the year the PS4 launched and Tequila Works had a colourful and exciting new game showcased as a Sony exclusive.

That game was RiME, evoking memories of anything Team Ico related even at that early stage it looked serene, enigmatic and had a simple quality that made you want to know it better. Blockbusters teased in that year came and went, blockbusters from following years have been and gone, then it was suddenly now and the time for RiME.

First off this isn’t an easy gig, it really is fair to say the game has delivered in spades and if I had a choice I would leave it right there, smack on 111 words. But, life isn’t like that, life is something else. 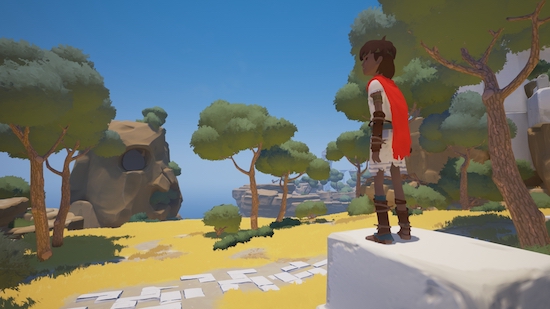 The game starts off with a boy shipwrecked on a beach, he used to be an unknown, but now we know his name is Enu. Waves lap at him, gulls wheel and call in the sky and he is utterly alone. The game offers little in setup or exposition and it need make no apology, you wake and you move on, quickly noticing the absolute lack of user interface, the game doesn’t need it. Controls are naturally intuitive and there is no forced training sequence interrupting the flow of the game, everything Enu does makes sense with the controller. At its heart RiME is an open platform adventure with a variety of puzzles, the art style is beautifully animated and the palette just enhances this, heading underwater is beautiful and almost as visually stunning as some of the grander sights up in the high places. 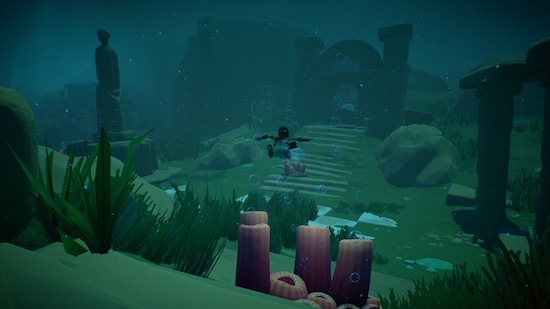 So, for a game to have little or no narrative, little or no vocal work – how does it get you to progress? The answer is that I am not sure, I do know that clearing a puzzle and dipping your toe into the next area is an addictive draw. The game pulls you well enough like Journey did before it, but the mystery and intrigue of what is around the next corner just adds to the experience and makes it un-putdownable (its a word).

The first major puzzle (after taking a few nosey detours) sees you unlock the beautifully animated fox, a companion of sorts that will pop up ahead of you at certain points, showing you the way forward and often helping (albeit subtly) with more taxing puzzles. This is accomplished by an incessant yapping which is just at the right pitch to annoy my own dog… 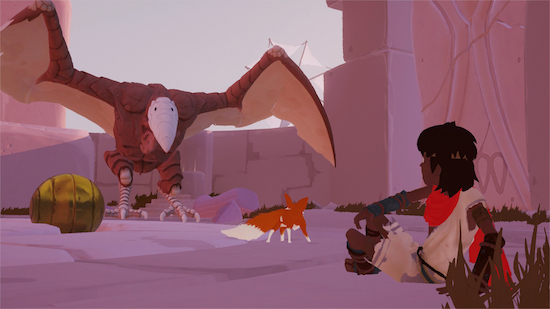 Following on from that there are a host of challenges, some will need a little thought and experimentation to resolve, once you see the answer they make sense, but that eureka moment is always a sweet reward. The variety is the key, with environmental puzzles that make sense and they are barely repeated. One main issue I take with lazy design is when levels become carbon copies of themselves, RiME is always fresh and satisfying. As is avoiding whatever hazards may be thrown your way, either high and dangerous falls or the occasional inhabitant of the island, that said being caught or having an accidental death is no real impact the game is very good at getting you back on track a few moments before. Again it’s about the journey, not those moments.

When we first glimpsed the game it looked like an open sandbox to explore, it has moved away from that – there are distinct areas to move through, split into chapters for want of a better word and the names of these chapters will make sense by the endgame. Transition into these chapters will be a one way ticket, so a return play through would be required to secure missed collectibles and to drink in more of the ambience. 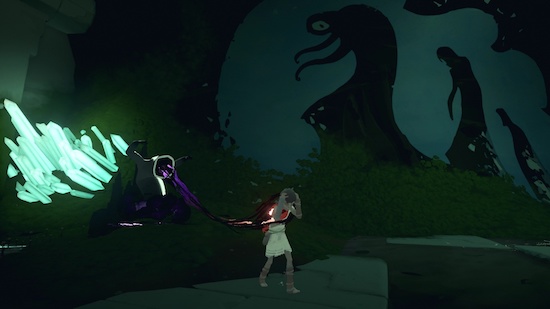 I didn’t go into RiME with high expectations, I just wanted to enjoy myself and I did. I invested in the adventure and embraced the world End passes through, the setting has the feeling of a classical Mediterranean island with imposing white structures and far off points of interest, the sea is blue and the sky too for the most part. The island doesn’t need a reason to be the way it is, it is quite happy putting itself out there and being accepted for what it is. Speaking of the endgame, it has the most useful placement of collectibles I’ve enjoyed. Collectibles are generally just trophy fodder, but here they add value to the culmination of Enu’s story adding credibility to the experiences you’ve had along the way. It is borderline perfection.

Not only is the game a visual treat it also delivers aurally, the ambience of the island and environments are incredibly atmospheric and the music is essentially half the story. Swelling into excitement or danger the music moves along with the game hand in hand, each moment is a thriving knot of sound, visuals and whatever you might be doing to make the boy move around. 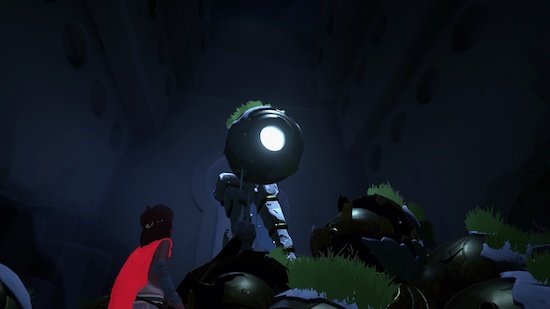 My takeaway fro the experience was a mixed bag of emotions, sad that it was over and while not being Journey short it could be considered short compared to some games, but that isn’t important here, what is important is whether it had an impact on you. It did have an impact on me, as soon as I was done I wanted to start again, not follow red herrings, understand the puzzles quicker, explore more, see relevance in the design of certain aspects.

For a game with little to no narrative in the eyes of the wider audience, it delivers for me, every element is perfect and comes together like its being conducted in the Albert Hall. I can’t recommend RiME enough. I finished it with a handful of emotions and a momentary ‘Aah!’ that made me think back to a first viewing of The Usual Suspects, RiME is an experience to be had, a subtle, elegant, uncluttered gaming experience that redefines how games should be made.