Splatoon is something of a phenomenon for Nintendo fans. Its a title that delivers family friendly arena combat in a fresh and unique way. The game was certainly a favourite on the wiiU, which I admit passed me by, but let’s make amends with that now there’s a Switch in the house.

Splatoon is  franchise with a very well defined sense of character, there is no mistake when you see the artwork or catch a glimpse of a Squid of where they belong. It may be a hard task catching up when you don’t know the history, but it soon becomes familiar, although sense may come later along with buckets of pink and green ink.

Let’s be honest straight up, Splatoon2 is near enough a killer app for the Switch. It is an accessible and addictive online shooter, while there are solo modes to get you into practice it really is all about social gaming. The presentation and wrapping are essential to build the colourful world these creatures live in, but at its heart lies a slick and fun gameplay behemoth that will keep you coming back over and over. 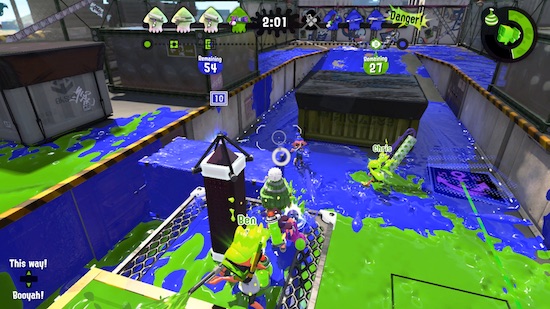 Once you’ve created a fishy themed avatar your cutesy creation is dumped in a bustling street, essentially  a hub-world for the game. There are copies of other players populating the space, not really active, just being there for you to explore. The street is lined with a few upgrade shops, items coming in the form of wearables, these items will self populate with bonus skills if you wear them long enough. There is of course the weapon shop, entry to the online matchmaking, a training run through the horde match type Salmon Run and finally a seperate lobby for organising local play with other Switch units. Phew. 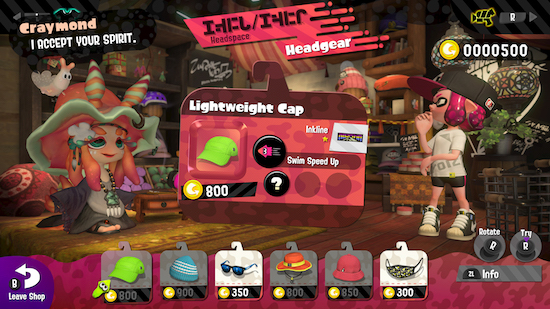 The weapons in question are all painting variants, either big rollers, sloshing buckets or paint spray guns. It really is refreshing to have the game dressed up like this, making it a safe and exciting place for all ages – weapons don’t have to be all about death.

Jumping into some online matches is priority number one to get levelled up, levelling up improves your character and skills, but also accrues funds to buy better gear. Better gear equals better performance and that starts the circle of life. Once you cross a few level boundaries some of the other game modes come into play, Salmon Run being a very fun Horde Mode to play co-op and Ranked matches soon make themselves known.

The base mechanics of Turf War for the uninitiated is that your team of Squids charge out into an arena and ‘win’ by painting more territory than the other team. Pretty straightforward really. You can seek out and damage other players, but they soon respawn and can land right back in the action at a press of a button so there’s not really much of an agenda to focus on it. Splatoon is most rewarding when you play the objectives, just like other games, but much more apparent here. 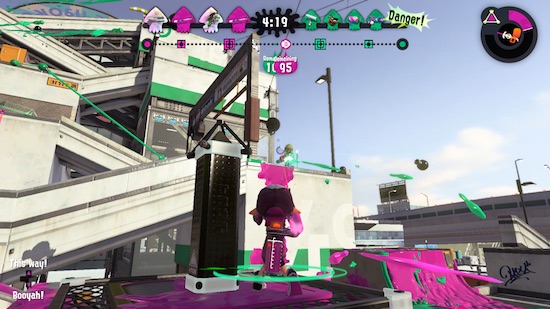 The arenas offer plenty of variety and lots of opportunity for vertical strategy, death is no stranger as they are often suspended over high drops which always generate a few respawns. The backgrounds are always lively with details and interesting activities going on, it really does add to the atmosphere, but you don’t get much chance to stop and admire it once the ink is flowing.

Graphically the game is a stylised treat, the splatter and fluid effects of the ink is smooth, the quirky look of the squids is spot on and everything else is crisply presented. Everything that is there deserves its place.

Gameplay wise it really is quick, sometimes to the point of being frantic. With a heavy trigger finger it is easy to run out of ink, but a quick squeeze of the left trigger will drop your character into Squid mode, swimming around in your colour – even up walls and popping back out with a weapon refill to boot. The more you play it the more it makes sense, games can turn in a moment depending on how well the team is playing and your contribution. 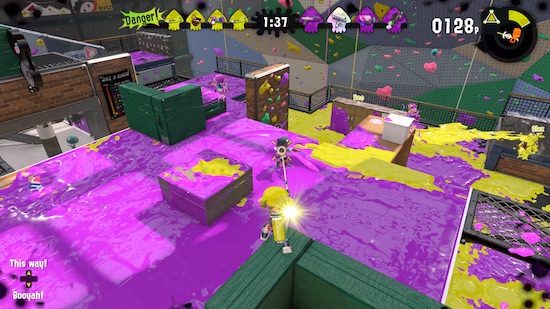 This is where I admit to having a struggle, the controls are pretty standard for a third person shooter with the added twist of Switch Joycons with or without motion controls. Personally I had trouble calibrating my brain to work with the Switch to use motion for aiming. This goes for the handheld mode or having two Joycons in your hands, I’m sorry but keeping the motion under control between my brain and hand just didn’t click.

Having turned off the motion I found a new challenge, my big thumbs and the range of motion offered offered by the Switch joystick. Controlling the X-Axis was nigh on impossible, spending my time staring at the sky or the floor while ink rained down around me. Having retrained my thumb I realised small movements are the way forward, however it will be essential to invest in a Pro controller at some stage.

The only other issue is fairly regular disconnects and the way the software doesn’t realise it wasn’t you that quite or had ropey internet. At first it was hard to get a regular match to finish, but that may have been the time of day and available peers causing the problem.

Overall, Splatoon 2 is obviously a must have for the console and will no doubt have a massive amount of mainstream attraction that could get more adopters over the line than Zelda ever did.