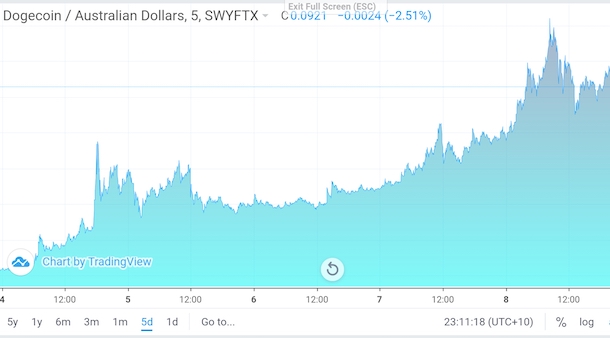 A few weeks ago, before I knew about DOGE Crypto the only Crypto I was familiar with was the badass little alien from Destroy All Humans. His (allegedly) life-size statue is staring over my shoulder right now. Then there was the sudden flurry over trading Gamestop shares in the U.S. Which lead to people suddenly understanding stockmarket terms like Shorts, Bears and ‘Stonks’. Maybe not the last one.

What this did was bring online trading into the forefront of people’s minds. It also made it suddenly more accessible and following the advice of Trading groups on Reddit. People actually made some money, pocket money for some, life changing for others. With people, being people, they immediately wanted the next cab off the rank. I figured a shallow dive might be a fun feature.

Enter the DOGE Crypto, not a Bitcoin, a Crypto, apparently.

I have no idea really what the difference is between a coin and a crypto. Hell, I’m not even sure what they do actually represent, but I started seeing rumblings about DOGE coin. Rumbings on social media, which is of course the only place to get solid financial advice. Twitter first, then Reddit and if that fails Google is your friend.

Over recent years, people has asked me about Bitcoin as if I had the answers. I really didn’t, I still don’t. It was always a forbidden subject, my subconscious pushing it away in to the SPAM department. Turns out I was wrong, there’s a whole trading economy making money out of these things. As if they were an actual tangible business or precious commodity. Welcome to the future.

Friends in High Places, on the way to the Moon.

DOGE Crypto Coin has friends and fans, what started out as a tongue in cheek project has soon become a meme. A meme championed by the likes of Elon Musk, who in turn has recently been supported by Snoop Dogg and Gene Simmons. What a roll call, If you want social exposure their combined 60 million plus followers can’t be sniffed at.

The DOGE Crypto brand icon is the Shiba Inu dog breed, I’m not going to try and explain why. It just makes good imagery for the meme game. The internet loves a good Doggo and the DOGE meme game is strong.

A quick tour of Socials will undoubtedly turn up the #Dogecoin hashtag, along with references of “to the moon!”. The faithful are solidly holding onto their dream to skyrocket this coin / crypto to a double figure value. Let’s be honest the potential return selling something you paid a fraction of a cent for could be life changing.

Taking the plunge on the #DOGE

It was the end of January, the Gamestop ‘Pump’ was fading and rumours about DOGE started gathering. When Elon Tweet’s the world responds. I was digging through a few tweet threads and saw the same theme. There was a lift coming, DOGE was about to go off. In relative terms, that would mean a few cents, but the masses were whipping up a frenzy and the internet was responding.

I decided to get on the DOGE Crypto bus, partly in curiosity and partly to write this, and started looking for the best method to buy and sell Crypto. Dabbling with a couple of setups, Coinbase was recommended, but it had a shocking sign up routine that gave me no confidence. By the time I’d given up and deleted the app, the DOGE was on the move.

My phone rang, emails arrived and a got dragged into a couple of hours of work. I decided to try once more and landed on SWYFTX a clean looking app. Easy to set up and being able to transfer funds to it instantaneously, it had me online very quickly. By which time the DOGE crypto had risen to .10 cents, this was .05 cents up since I was looking in the morning.

Was it time to jump on still, or should I wait? Being financially astute I checked Twitter for gossip. The DOGE faithful were pumping it hard, it was .10 cents now, but they were on their way to a full dollar. In for a penny I thought, as I spent a couple of hundred dollars on something that didn’t really exist. The transaction was done in seconds and before I knew it I was the proud owner of some DOGE Crypto.

The first twenty minutes were awesome. The swyftx app gives a realtime view of your portfolio, so the coin kept rising and my “investment” had the sweetest green percentage next to it as it grew in value. I was on late and missed the initial leaps, but if this carried on I’d be happy to check out a few hundred dollars richer.

I didn’t. That afternoon the spike dropped away, there can be many reasons. Most likely people that got the coin on the rise jumped out with a healthy profit. As with all investment markets your value can go down. There were certainly smart people out there dumping their DOGE , ready to buy back more of them at a cheaper rate. It’s the law of the jungle.

As a naive first time investor, I left it to ride. The Twitter community was sure it was rising again, why wouldn’t you trust them? Of course, it didn’t and over the next few days it dropped away back to the days before I started looking. What was I supposed to do? I should have dumped them early and bought again at a lower rate, more cheaper DOGE is better than less undervalued DOGE after all. That strategy would have taken commitment.

What I did do, was buy some more at the cheaper rate. Surely if it was down again it would rise again? Well, it kind of bumbled along for a week. Not really doing anything, but the mini-game feeling of checking my portfolio was real. Taking a pragmatic view, I decided I took the punt because I could afford to lose the investment. It was a curiosity experiment after all.

You cant type ‘Woooo’ without thinking of Ric Flair

Today I woke up to the news that Elon Musk had been Tweeting about DOGE again. Only this time people were taking notice, Snoop Dog pinned a #DOGE Tweet and Gene Simmons was cranking it too.

Here’s the important bit, after an average value hovering around .5c the DOGE Crypto Coin got back up to .10 cents today. It was also been holding around .95 cents since that peak. Right now its sitting at .098 cents, that means I’m up over 17% on my original investment. It can all change in a second, but here’s the rub, I could pull out now and be over a $100 better off. In the cold light of day, that’s not bad for a week.

That said, I’m still taking the view that it was a risk and experiment. So I’m going to hold it, forget about it and see where the Shiba takes us. Let’s say over the next 12 months they break the full dollar. I could sell half of my coins and still have over 3,000 to keep trading, while still being a few thousand dollars up. It’s crazy and it doesn’t make sense, but its real.

Let’s say that in five years the DOGE Crypto gets up to $50, which wold mean I could sell 6,000 coins at $50 each. When I paid an average of 0.5c each… that doesn’t bear thinking about. It does a great example of showing where the hype comes from and how grandiose peoples expectations can be.

What does make sense in a DOGE eat DOGE world?

You have to wonder who the experts are. There have to be canny investors turning Crypto over all day long, taking the small wins and building their portfolios. In a day you could, with a good win, cash in a few dollars gain, wait for a currency to drop and then snap up more coins than you sold. Rinse and repeat, you’ll soon have a growing portfolio, but there has to be a time to exit the game.

Most of us have jobs, lives, commitments that prevent this, but you can’t ignore the potential to see a gamble of a few cents turn into tens or hundreds or thousands of dollars. The smart money has to be on the hard working buyers and sellers trawling the lower level transactions, moving fast and striking without doubt.

I’m not a gambler or smoker, but if I was to reduce my coffee input and give myself a few dollars to play with each week it could soon turn into a pot. Some days it will be down and some it will be up, but it would still be mine.

I still don’t really understand the whole concept of the coins, but I can see where the buzz comes from.

It’s not addictive, yet, but its an intriguing situation to be in and I’m getting a taste.