There is no doubt the Switch is benefitting from the introduction of classic franchise games like Zelda, Mario Kart and the upcoming soon to be franchise Splatoon. Everybody is getting a bit of what they really wanted, but what the system also needed was a solid, innovative and new IP, cue the strange and loveable brawler ARMS.

Taking a heap of inspiration from Western friendly Manga styling ARMS offers up an interesting roster of characters that are pitched together in beating each other senseless via their, yes,  ARMS.

Of course it needed a twist, so here it is. The ARMS in question are spring loaded swing them across the arenas extendable arms, all loaded with exciting and varied beating instruments at the business end. 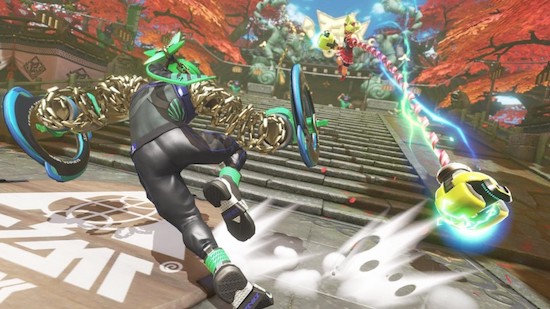 The styling of the characters leads to some interesting takes on the premise, ribbon like projecting arms must be a challenge to conceive, but they have done well – ranging from chains to bandages and the result is on-form, each character having their own traits and abilities. Their ‘Hands’ can be unlocked in a sideshow mini-game which you need to earn credits to play and earning credits, you guessed it, you have to grind some time in the various modes.

The mechanics of the game work really nicely and at a couple of levels. For a novice the first few hours are pretty straightforward, thrashing through the elimination stages across all fighters in a Grand Prix or picking one off bouts. All good ways to hone your skill sand get used to the way the game works. Incidentally while the Switch Joycons do support various connected methods of control the game is at its best holding each Joycon and swinging away. That said, it often feels like you might be over compensating compared to the action on screen, but that’s just your brain getting carried away. 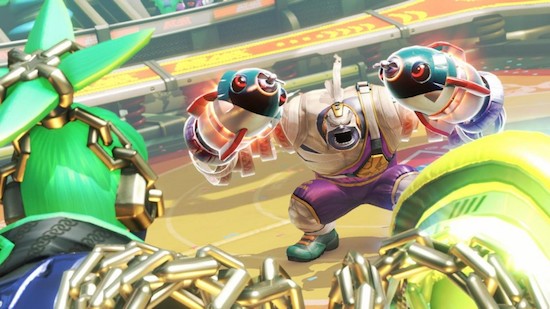 Once those first few hours give way it becomes apparent that there is a very layered game of Rock, Paper, Scissors going on. Using blocks and dodges more effectively, sneaking tips from the web on special moves and learning just when to keep pounding your opponent with a frustrating grab. Punches can be launched straight or swinging around obstacles, they are also effective from height mid-jump, just watch out for a counter.

Each character has the chance to throw in some extra special moves once their meter is filled and the effects of these will be up to the combination of ‘hands’ being used. While the AI seems to fill their meter sometimes too quickly, its a satisfying way to end a round. It’s also worth noting that a charged meter carries over to the next round, so you don’t need to use it up straight off. 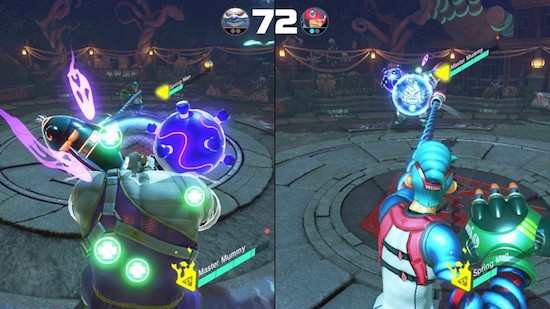 Online there are party modes that will throw you into multiplayer bouts of 2 vs 2, where teams are joined together and cannot stray too far apart. Success here is all about incapacitating the opposing team and pummelling the weakest as much as possible. The game does a good job of mixing up styles so that players are not always on opposing sides and can enjoy teaming up against the AI.

There are also some fun variants on the basic brawl, I especially enjoy the Basketball take where you need to grab and slam dunk your opponent more than they do it to you. It’s all about timing and throwing out both ARMS at the same time to score. The result, well not unlike actual basketball really. 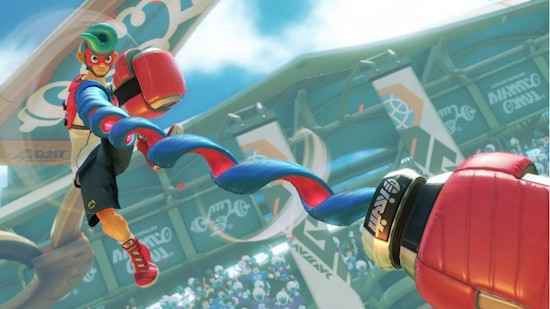 ARMS is a great fun title to play, it does have a level of nuances that will take time to master and will be active on the Switch for quite some time to come. It will be interesting to see what happens in a new incarnation down the track or whether there is much option for DLC. Either way, Nintendo took on a new IP that could make optimum use of the Switch Joycon controllers and it worked, really worked.