As it is with my real-life mountain biking these days, the first run on the trails in Lonely Mountains Downhill tend to be slow and methodical, getting the lay of the land, so to speak.

Freewheeling down some sections, slowly pedal down others. Paying close attention to where the shortcuts are that will make future runs quicker. It could be a series of rock jumps or a cut down a bank. Anything that will shave precious seconds off future runs.

Slowly and surely is a pleasant experience too. The only soundtrack accompanying you is the rush of the wind through the trees, the chirp of birds. Or the sound of your back tyre skidding in the dirt and your freewheel pawl. The pawl is the ratcheted mechanism in your derailleured bike’s rear hub. It’s that makes the noise when you’re not pedalling, chattering away as you coast down a decline.

Lonely Mountains Downhill began life as a Kickstarter project by German game makers Daniel Helbig and Jan Bubenik. Full disclosure here: I backed the project and my name’s in the game’s credits. It also got a mention in my pick of 2019. 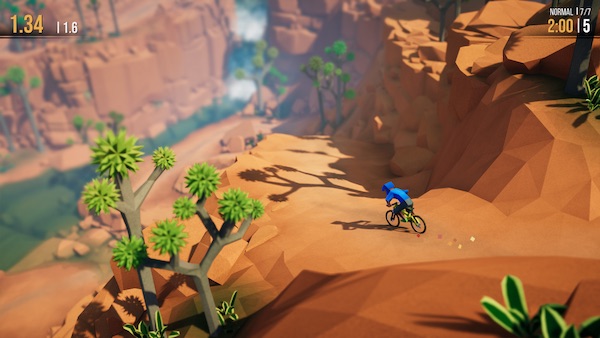 As an ageing mountain biker the game appealed to me as a way to enjoy one of my passions. When I’m stuck at home and the weather’s too horrific to don the rain jacket and hit the trails. I was also attracted by its low-poly graphical style, with a blocky, chunky biker and vibrant environments.

Be warned, though, it can be brutally tough. With challenges that unlock outfits and better bikes forcing you to throw caution to the wind and scream down a trail as fast as you can within a specific time. Or with a limited number of crashes.

Having played it on PC, Lonely Mountains is the perfect fit for Nintendo’s handheld console: It’s the quintessential “one more try” game as you work on perfecting your run despite having crashed for the seventh time. You will crash, many, many, many times as you aim for the next checkpoint and the end goal.

Lonely Mountains is also one of those games that, using the old adage, is easy to learn but hard to master. As you’ll find your self having to negotiate treacherous rock formations, tree trunks and tight corners to put in the best time.

Technically on Switch, Lonely Mountains looks the part with its nice graphical look, and plays well. Although there are noticeable frame rate drops at times. Sometimes the camera is a bit wayward, at times obscuring your view (which is only generally a few feet in front of you anyway) with a large tree or rock formation, causing you to crash into the rocks you couldn’t see. 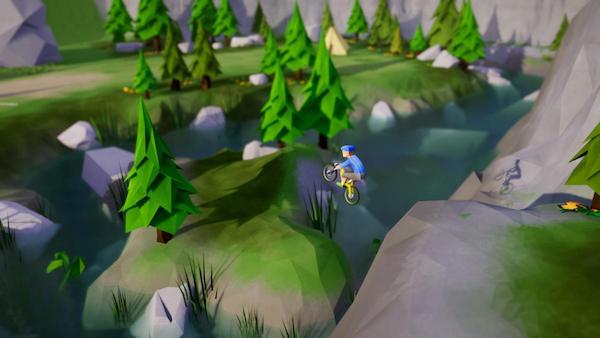 I also found the tolerance for crashing seemed to vary and it wasn’t consistent: Obviously, I crashed if I hit a rock face at speed but I’d also be penalised with a crash if my rider rolled his front wheel into a small rock or nudged a tree at a slow speed (something that wouldn’t happen in real mountain biking). A little leniency needs to be given to collision detection for some of the obstacles, perhaps.

Lonely Mountains Downhill is perfectly suited to the Switch’s smaller form factor. I wouldn’t recommend playing it in docked mode (if you have an OG Nintendo Switch). As the graphical compromises for the Switch are glaring.

One more go, after the next one

As I said earlier, Lonely Mountains is one of those “Just one more go” games. Even when you’re frustrated at how many times you’ve crashed. My son rode a trail and was cursing how much he was crashing. He kept going as he wanted to beat the time I’d posted for the same course. He succeeded, beating it by two seconds. 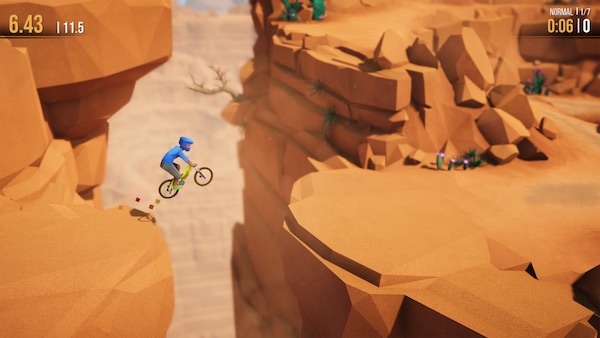 Thanks to Lonely Mountains Downhill on Switch, I can now “ride” my mountain bike any time I want. At the office, while I’m lying in bed, while I’m, ahem, in the bathroom. It’s also the perfect thing for when I just can’t bothered kitting up and hitting my local trails. Especially with winter looming and its inevitable wet & chilly weather.

The Original copy for this review was posted on Gerard’s personal blog GamejunkieNZ. 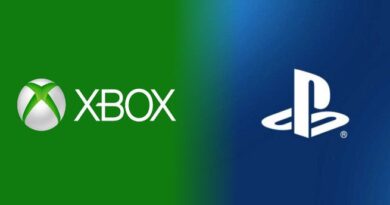